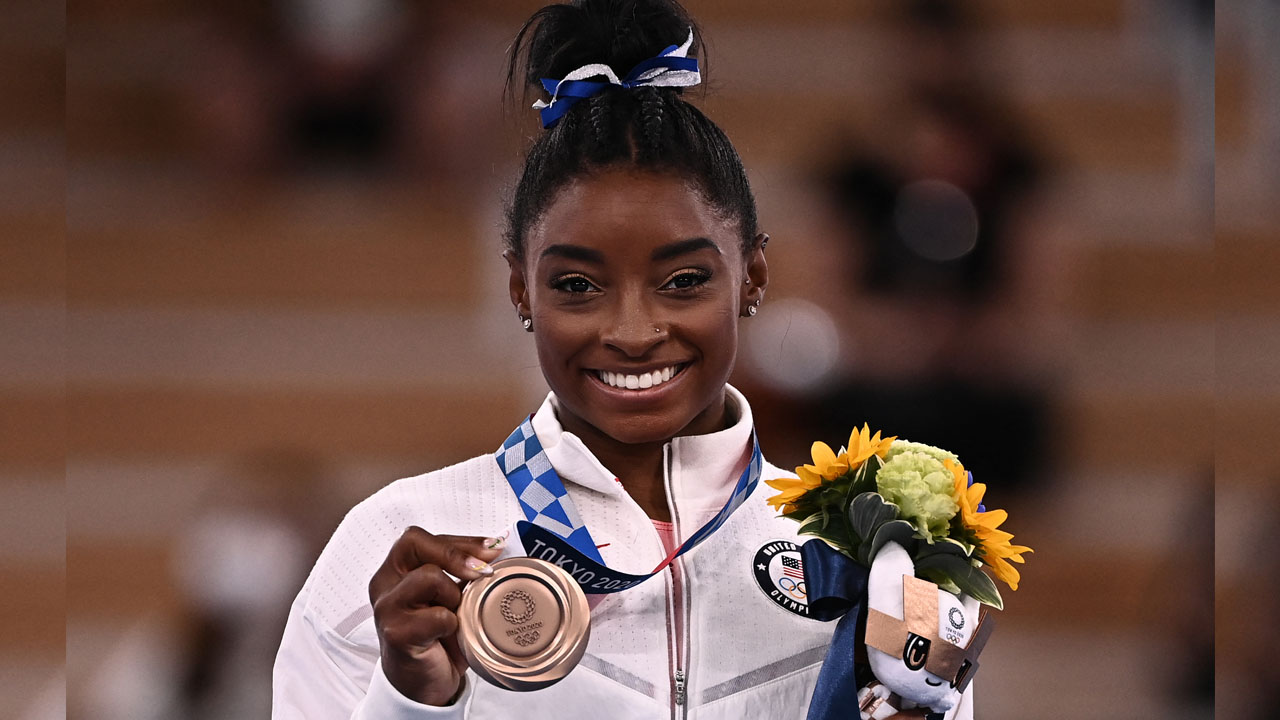 USA’s Simone Biles poses with her bronze medal during the podium ceremony of the artistic gymnastics women’s balance beam of the Tokyo 2020 Olympic Games at Ariake Gymnastics Center in Tokyo on August 3, 2021.

Simone Biles made her long-awaited return to the Olympic Games on Tuesday, taking bronze in the beam final won by Chinese teenager Guan Chenchen at the Ariake Gymnastics Centre.

It was the US superstar’s first taste of competition in Tokyo since dramatically standing down during the women’s team final last week, struggling with the “twistiest”, a condition meaning gymnasts lose the ability to orientate themselves in mid-air.

The four-time gold medalist from the Rio Games received a huge cheer from her US teammates when she entered the arena.

With bib 392 on her back, she filed in with the other eight finalists, blowing a kiss to the cameras.

Another cheer rang out when the stadium announcer said: “And now, representing the United States….Simone Biles..”

She looked pensive on her comeback as she waited for her turn to climb up onto the 10cm wide beam for her 90-second routine.

Among the audience was Olympic chief Thomas Bach and two canine cardboard cutouts of her beloved French bulldogs — Lilo and Rambo.

Peeling off her US Team red tracksuit, she practiced her dance moves in her star-spangled banner leotard as she waited for her turn as the third to perform.

At 6:11 pm local time (0911 GMT), it was her time. One long week on from her first shock withdrawal, the 24-year-old woman from Ohio was finally back at her day job.

Wiping her brow, she approached the beam, chalked up, and finally got the wheels back on her derailed Olympic campaign. x

While avoiding any twists incorporated in her favored and most difficult moves, she put in a solid performance, ending with a double backward somersault, double pike dismount.

Her face breaking into a broad grin, she waved and hugged rivals and team officials, the relief of having performed clear on her face.

Her routine earned the triple world champion on the apparatus 14.000 points.

She was lying second behind Tang Xijing until 16-year-old Guan, the last of the eight finalists to go, put in a superb display to take gold with 14.633 points, relegating Biles to bronze, the same colour she won in Rio.

Bach was one of the first to congratulate her on her comeback, as were ‘Lilo and Rambo’ in their mute manner from the stands, after her Tokyo nightmare ended in smiles on the third rung of the beam podium.

This site uses Akismet to reduce spam. Learn how your comment data is processed.